After the postponement of Boston Comic Con last month, I kicked off the convention season with Anime Boston this past weekend. Although I’m not as well-read in anime/manga as the average attendee at Anime Boston, this convention is usually a pretty fun time to hang out with friends, wander around in Artists’ Alley, and blow my money on cute shit. This year was no exception. 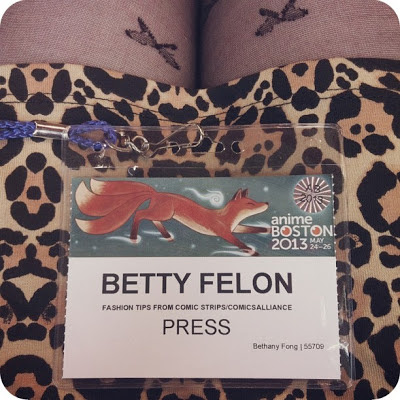 Since I’ve spent most of this month recovering from all the dumb guff that happened in April (AK’s housing issues, Boston Marathon tragedy, the city-wide lockdown, the cancelation of Boston Comic Con, the demise of ComicsAlliance(?)), we opted to skip out on costumes this year, and I’m quite relieved that we did. Anime Boston has a notable cosplayer:civilian ratio, wherein a majority of the attendees are in costume; combined with the growing annual attendance of Anime Boston, this ratio can be overwhelming for everyone, especially with the bottlenecked crowds and the added security precautions this year. So instead, AK & I opted for cute, yet comfortable outfits and headed to the convention with Andrew and Nick in tow.
We ended up spending most of our time at the convention in the exhibit halls and in Artists’ Alley. Although I usually end up with a pretty decent haul from the exhibit halls, the one major downfall is that the merchandise is rather limiting, with almost all of the booths carrying pretty much the same merchandise. The Artists’ Alley however offers more variety, with fan art and homemade items catering to a wider range of fandoms. This year, Artists’ Alley was upgraded to a larger exhibit hall, which allowed for better crowd traffic and a nice retreat from the crowded exhibit halls and hallways (and thus, a great place to meet up with friends!). I ended up meeting a ton of great artists this weekend and came home with beautiful artwork to hang up in my new apartment.

After the Artists’ Alley closed on Sunday, we saw Star Trek Into Darkness and watched the first episode of Arrested Development and collapsed. And Matchbox Twenty videos happened at some point this weekend (obvi).

My one regret this year was that I didn’t get to hang out more with my other friends. I ran into Shelley, Karen, Mona, and Beany in Artists’ Alley, and I got to spend a little time wandering around with J’ai and Abby (of Human Sushi), but I always forget how hectic Anime Boston can get when you’re trying to synchronize plans with a bunch of friends. I’m heavily considering applying for a table in Artists’ Alley next year – that way, I can sit down for most of the convention (my legs were so sore from trudging around this weekend, you guys) and it’ll be easier to track me down while I’m selling bows and superhero accessories or whatever~

Stay tuned for my cosplay gallery in the next post!