In between chain-naps and King of the Hill marathons, I’ve spent the past week cleaning, purging my belongings (kind of), and packing up whatever’s left to move to my new apartment in Somerville this coming Saturday. Since AK has already moved into our apartment a few months before my lease was up, I’ve spent this entire Summer bouncing between two residences at the opposite ends of the Redline. As much as I hate packing and moving (because of my dumb weak spaghetti arms), it will be a huge relief to have all of my stuff in one place and to share a headquarters with AK once again. This is an extremely transitional time for us, not only with the move, but with various life stuff and birthday stuff occurring over the next few weeks. It's exciting!

But don’t get me wrong - I still absolutely 100% hate packing and I absolutely dread the entire ordeal of moving and I kind of want to just stay another year in my old apartment just so I don't have to deal with any of this guff. I recall struggling with the packing and moving process back when I was a teen, when my family moved across the city to a new condo – I dawdled and took my time, looking through all of my belongings and reminiscing about ~the good times~, which really wasn’t conducive to throwing out the stuff I didn’t need, and sorting and packing the stuff I wanted to keep before moving day, which stressed out my parents and then I got really stressed out and it was terrible. This has been more or less the same cycle that I’ve fallen into every time I’ve moved (to date, I’ve moved twelve times, with the upcoming move being my lucky thirteenth). I'm still in pure and utter disbelief that I was ever able to pack up all of my belongings while going to school and/or working twelve times prior. Perhaps it was a combination of owning less stuff and keeping my previous rooms relatively clean, I was still able to pack up efficiently despite my tendencies to want to look and touch everything I have ever owned during the process.
Sometime around October 2010, my room got really messy. We had just finished unpacking in our previous apartment in Somerville, but then in the midst of getting ready for New York Comic Con, my new room was invaded by a mess of fabric scraps and a pile of clothes from last-minute packing. I have not lived in a clutter-free room since, and I believe that the state of my room just hadn’t recovered from 2010, but it was a mess that I could handle. I had a spacious room that allowed for more dress racks and more shelves (and inevitably, more stuff), along with a smaller room that AK & I used as our crafting room. It was a pretty nice apartment in a great location, and for the most part, we were all pretty set on staying there for at least 3-5 years. It was a comfortable life, not having to worry about packing and moving the following year, which also meant that I didn’t have to worry about keeping most of my things in boxes (in case we had to up and relocate to a new apartment for whatever reason). The luxury of not worrying allowed me to live a little messier than I would’ve at my previous residences (my apartments in Amherst, Allston and Cambridge were significantly tidier), and I honestly really didn’t mind carving a path through the growing piles of clothes and comics to navigate through my room.
So it was inevitable that the eventual struggle of moving out of that apartment in Somerville was coming to terms with the fact that I was leaving a place where my life finally felt settled (or as settled as a twenty-something year old could be without getting married or paying for a mortgage) - in reality, I only stayed there for two years after AK and Jake moved out few months prior. Having to sit down and clean and organize and pack up all of my accumulated belongings forced me to face the reality of the situation – that I was completely heartbroken that my best friend/soulmate was moving across the country forever; that my sense of stability was gone and that I had to scramble to find a new place to live; that I’m kind of a hoarder. Fortunately, on the moving front, I was lucky enough to rent out a room in Benn and Liz’s house in Quincy, and shortly after, AK ended up moving back to the East Coast. 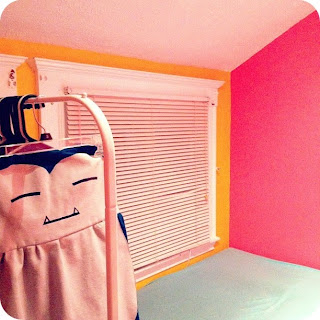 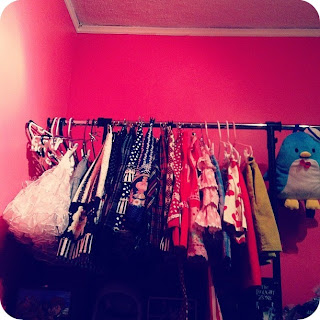 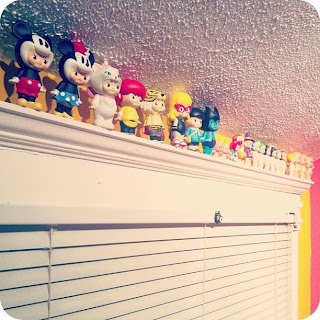 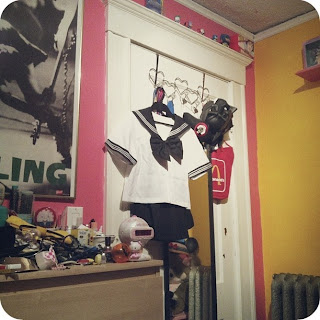 My hoarding problem was the only issue that remained during this transition, as moving from a big cluttered room to a quaint nook inevitably lead to a default state of a tiny messy room, and honestly, I didn’t mind living like this for the past eleven months – my room instantly felt lived-in. I didn't mind having a smaller room, and I had every intention of keeping it mess-free to no avail. This immediate sense of familiarity and comfort combined with a significant savings in rent and bills lead to me treating myself a little more, if not too frequently, because I could afford to – after growing up on a strict budget, it was liberating to be able to make up for all the lost years by treating myself to virtually whatever I wanted. My tiny messy room quickly became overflowing with more and more treasures that I didn’t have room for, to the point where I could barely open my door. Likewise, my general health has suffered from ~living excessively~ – my eating habits have gone off the charts, wherein I’ve gotten in the habit of treating myself to takeout several times a week (Quincy is filled with amazing restaurants within walking distance), and since I was on the opposite end of the Redline, I was less likely to be out and about and active after work. On the creative end, my head is filled with so many ideas and projects that I want to do, but I hardly follow through because I spend most of my time eating and online shopping and sleeping. And like, remember when I intended to update my blog more than once every couple of months? Remember when I had so many goals and stuff?! But like, whatever - eating/shopping/being sedentary/sleeping is fun.

So despite the promises of residing in a Les Villainettes Headquarters once again (as well as a reward of a post-move haircut in Harvard Square and dinner at Highland Kitchen), I’ve been struggling to proceed with this upcoming move. I’ve had months to gradually pack and move stuff into the apartment, and yet, I’ve really only moved one of my sewing machines and a couple bags of clothes. I could’ve painted my room weeks or months ago, but I didn’t get around to doing that until Tuesday, around midnight. While I’m definite that conventions and grossly humid weather and general laziness played their respective parts in distracting from getting my shit together, I think that upon my final week in Quincy, with about only 1/3 of my belongings packed up and ready to go, I’ve come to the daunting realization that this move is the first step toward change and self-improvement.

Every time I even look at, let alone think of, all the things I need to sort through and pack up, I get exhausted and frustrated about how much stuff I own and how I’ve allowed myself to be satisfied with the way I’ve been living. This move has made me realize that I feel more claustrophobic (than comfortably cushioned) by the excess I’ve created around and within me. While I will always want more (stuff, time, money, et cetera), I think that what I really need right now is more self-control. I want to prioritize and streamline my belongings, my ideas, and my life, and I want to follow through with that mindset in my day-to-day life. While there’s nothing wrong with a little clutter or treating yourself to things, the sense of stability that I once got out of being comfortable and lazy was really just a static luxury that was completely beyond my control. Although I consider myself an independent and generally stable individual, I ended up going through the motions over the past couple of years. I feel trapped and defined by the things I own and consume, and I’ve made a habit of collecting excuses from myself and people around me as to why I’m still not satisfied with the life I’ve accumulated, and I need to stop. I’m willing to trade in the clutter of compulsive shopping and fair-weather friends and my growing collection of bad habits for a sense of control again.

Side note: Does anybody want to adopt some of my unwanted comics and old dresses?
Posted by Betty Felon at 2:35 PM