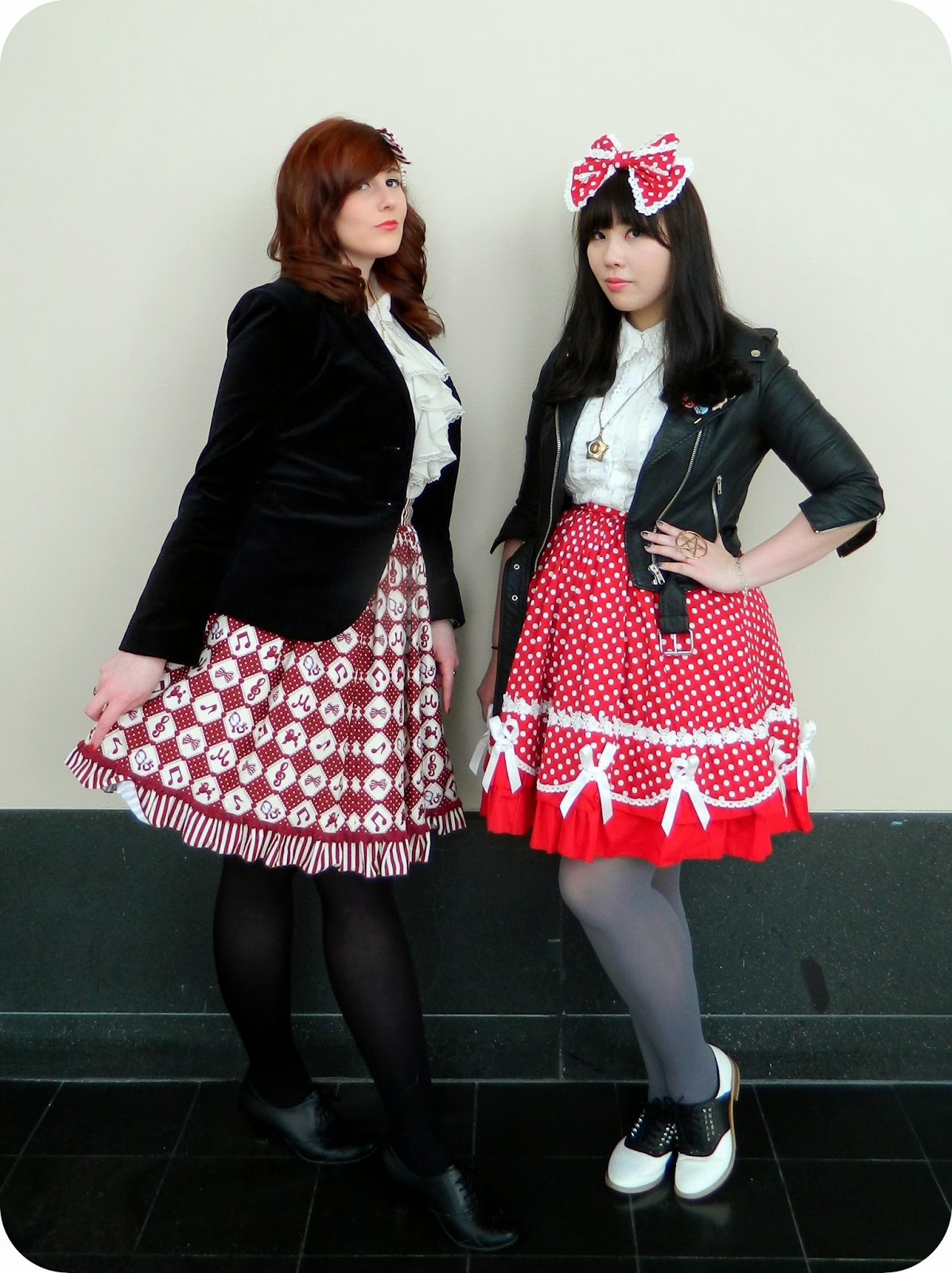 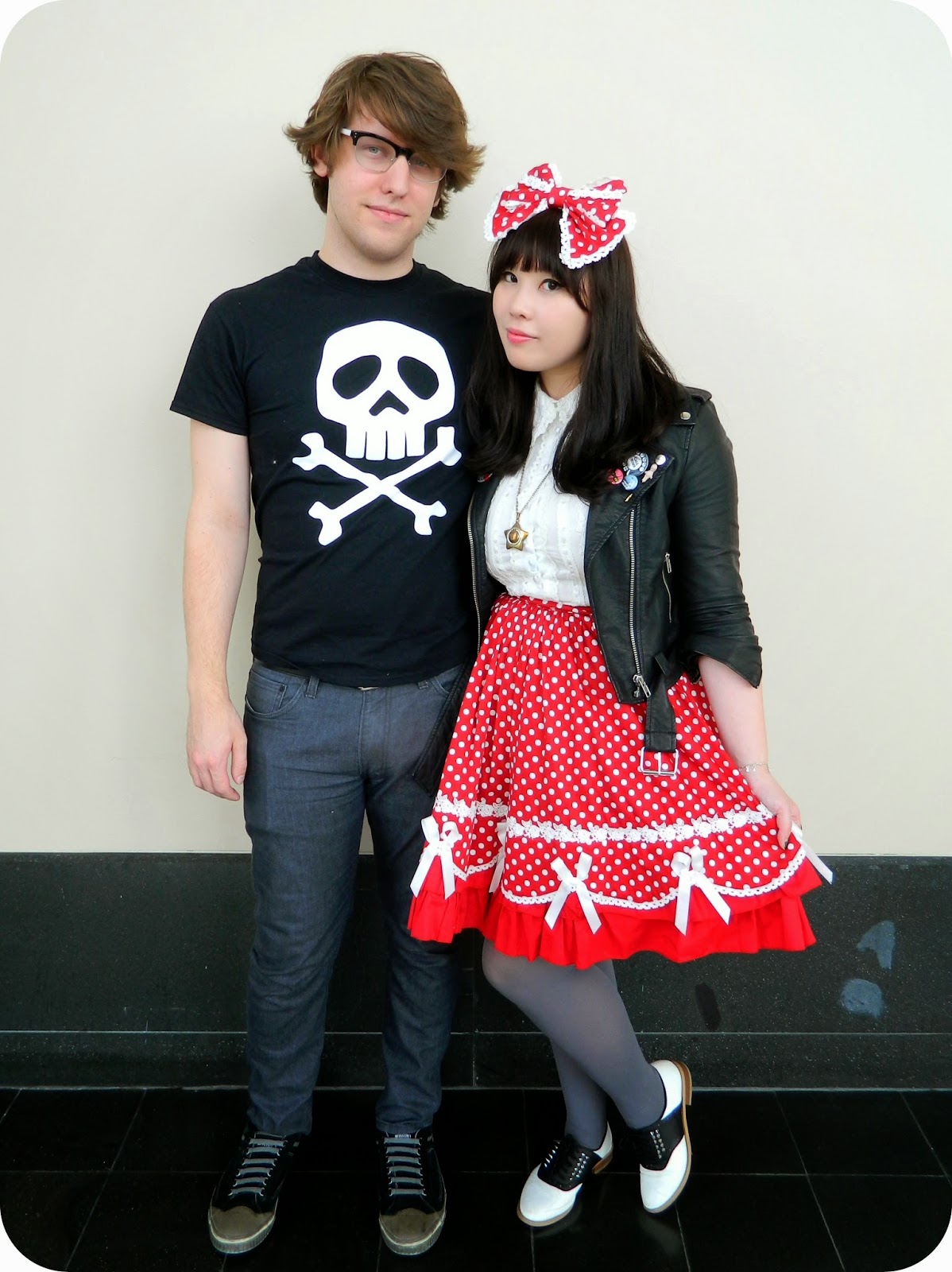 We launched this year's convention season with Anime Boston this past weekend, and now I have a brand new alpaca. 2014 marks my ninth year attending this convention, and despite my previous instances of allegedly Not Really Giving A Fuck About Anime (But, Like, I Guess I'll Still Go To The Anime Con), this current Magical Girl Renaissance has definitely revived my enjoyment of the culture and made me HYPED on going to a Japanimation Conference. Additionally, Anime Boston consistently delivers a casual convention where I don't have to worry too much about anything aside from wearing a cute outfit, taking photos of cosplayers, and blowing my money on cute tchotchkes. This year, Jordan and Trenton joined us on our Anime Boston hijinks, and we had The Best Time. 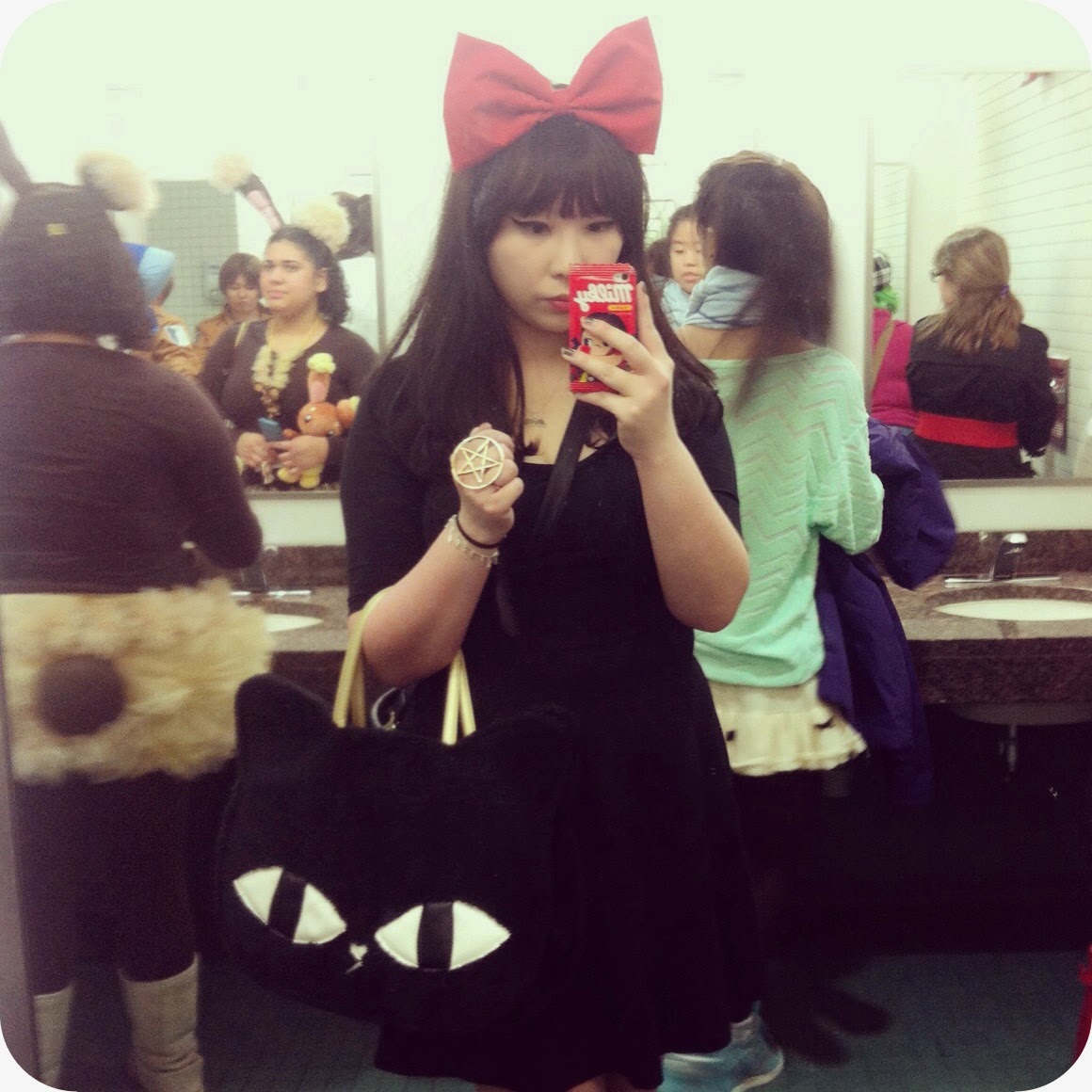 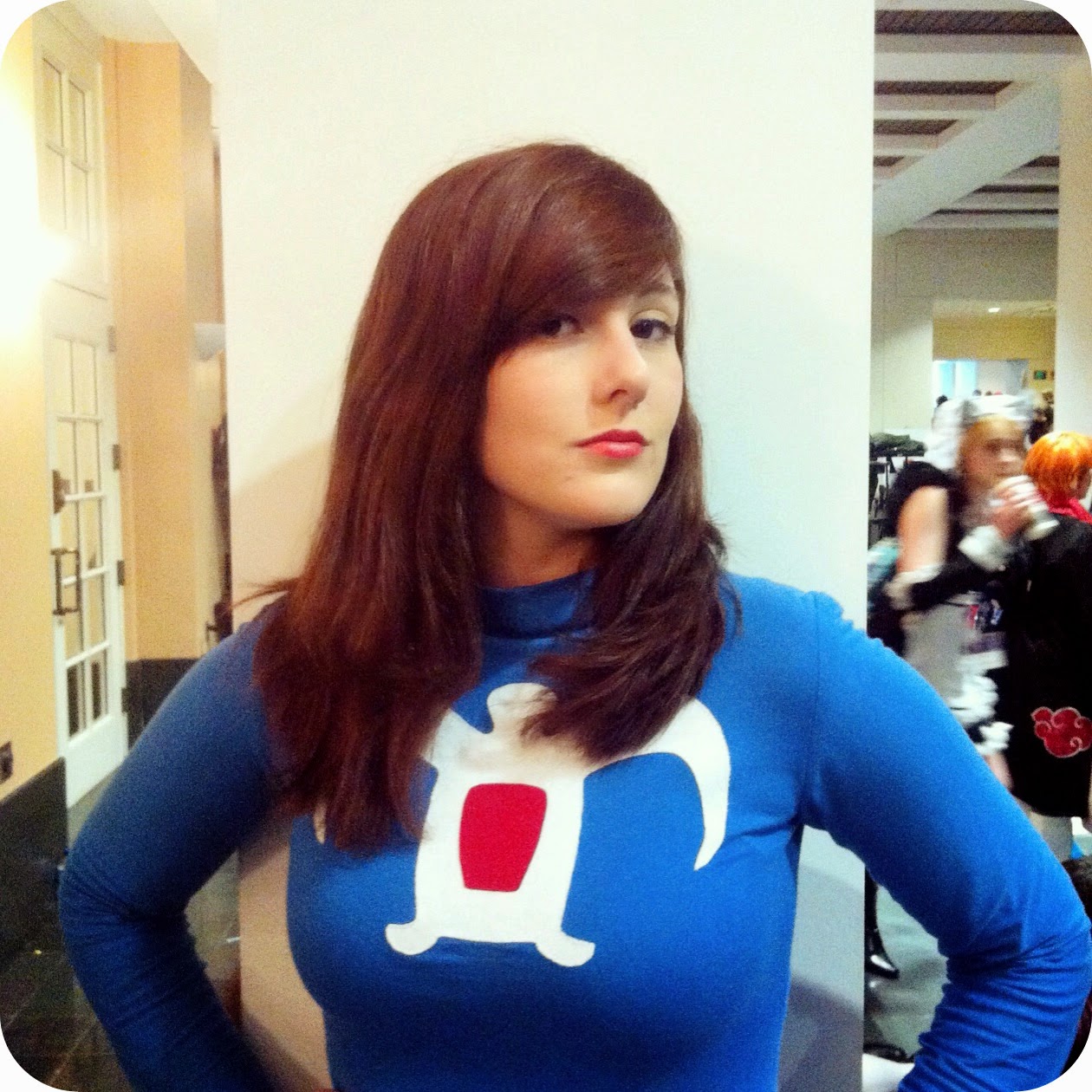 AK & I originally had cosplay plans for the weekend, but we had to postpone them due to delayed wig deliveries, so we opted for lolita ensembles on Friday. Since it was AK's first time wearing lolita, I had a lot of fun curling her hair and styling a coordinate for her. As for me, I haven't worn a lolita coordinate in a few years, so it was actually really refreshing being able to bounce around like a dumb doll. On Saturday, we wore casual Studio Ghibli costumes; AK borrowed my Nausicaä dress, and I whipped up a quick Kiki-inspired outfit (because obviously). The con was a bit too hectic and crowded for us to get proper outfit shots, but I would love to do a Studio Ghibli cosplay shoot with Benn and Liz sometime in the near future (aka when it's not freezing outside by the way hi welcome to the blog where i talk a lot about the weather). 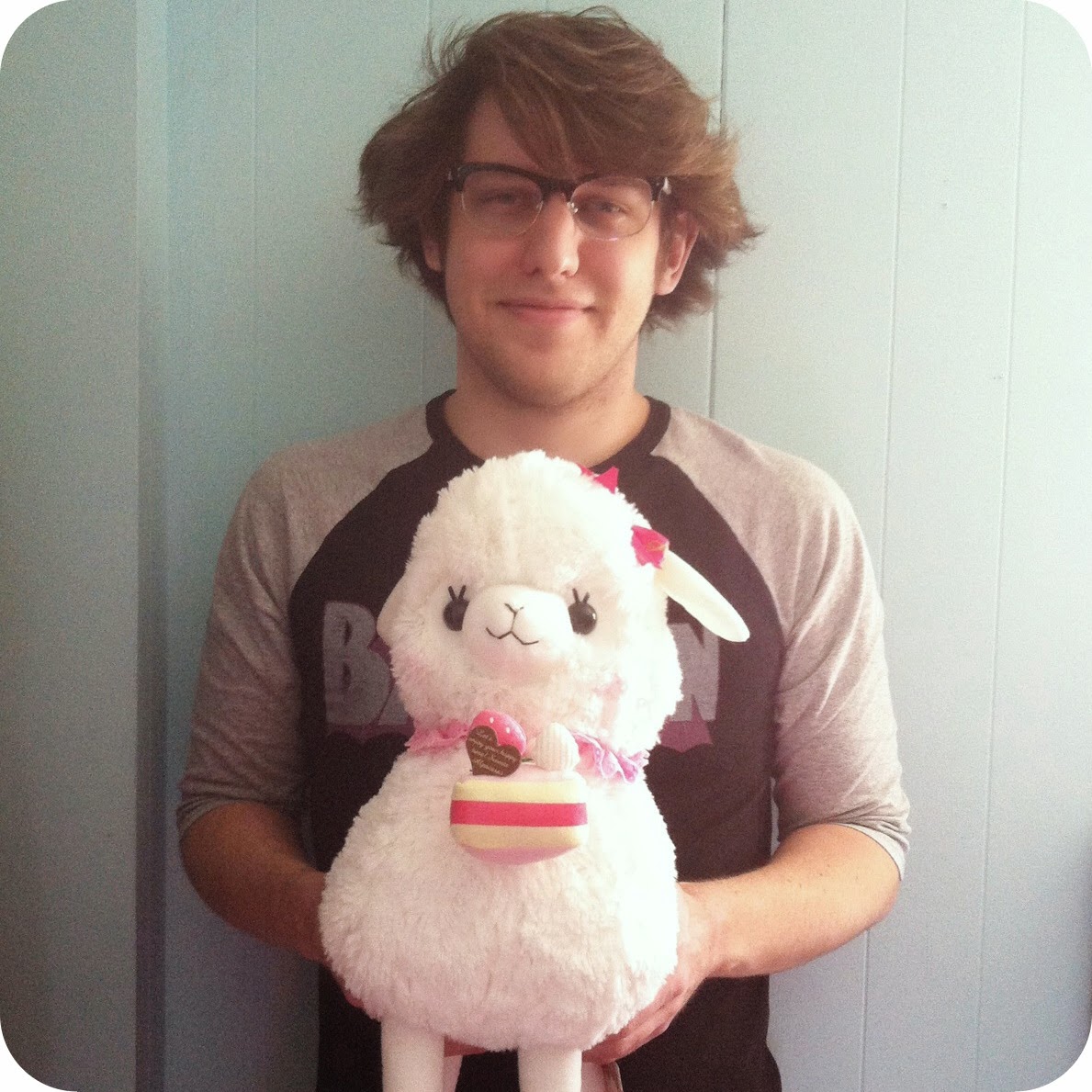 We spent most of our time wandering around around the large dealers' room and Artist Alley, in search of magical girl accoutrements, tokusatsu swag, and The Most Perfect Alpaca To Add To My Collection. While we weren't able to track down any スパイダーマン/Supaidāman merchandise unfortunately, Jordan was able to find The Most Perfect Alpaca for me (as seen above) ♡ I also got an amazing Lum commission from Arielle Jovellanos, and some small art prints for my cubicle at work.
Outside of the con, we made some time to see a few friends while satiating our cravings for ramen and milkshakes. We also had every intention to go to Doremi for karaoke at some point during the weekend, but we opted for drinks and card games at our secret lair in behalf of con exhaustion. And then suddenly, our mini-vacation was over and Jordan flew back to Austin and it's supposed to snow sometime this week.

Anyway, here are some more photos from the con and stuff~
(Note: All of my cosplay photos can be viewed on ComicsAlliance!)